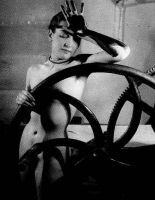 "One of the most uninhibited women I have ever met".